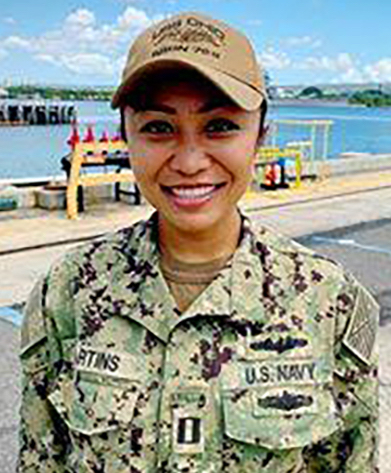 Trailblazer Lieutenant Melanie Martins is a supply officer serving aboard guided-missile submarine USS Ohio (SSGN 726). She is also one of the first Filipinas to qualify as a submariner and earn her submarine warfare insignia in September 2019.

The submarine warfare insignia is worn by all qualified submariners worldwide. It is a universally recognizable symbol of a submariner’s experience, competency and in the case of officers, ability to assume command in an emergency. Over the course of many decades, earning one’s “dolphins” has evolved into a rite of passage in submarine culture. In earning her “dolphins,” denoting the rank’s corresponding metal pin, Martins was added to the list of women expanding among the elite community of Navy personnel.

The U.S. Navy submarine warfare pin features the starboard angle of an O-class submarine emerging from the center of the insignia, slicing through the waves of an oceanic horizon. Two dolphins, the attendants of the Greek god of the sea Poseidon and patron deity to sailors, bring shape to the submariners’ badge and are seen surfacing from the sea facing the submarine.

The insignia is an unspoken indication that the wearer has challenged the depths of the seas and has been deemed worthy of donning it by their peers. Those who wear “dolphins” are widely acknowledged as part of an elite community, and as Martins relates, accepted as part of a close-knit team.

Martins, originally from Angeles City, Pampanga, Philippines, made the challenging transition from the enlisted aviation community to the wardroom of a guided missile submarine in 2013.