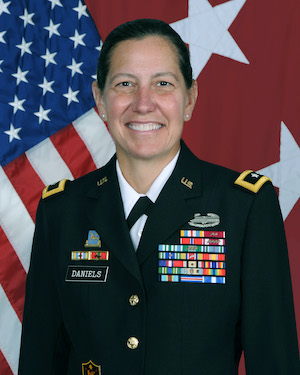 The U.S. Army recently announced that the U.S. Senate has confirmed Major General Jody J. Daniels for promotion to Lieutenant General as well as the Chief of Army Reserve and Commanding General of the U.S. Army Reserve Command.

In the 112 years of history within the Army Reserve, Daniels is the first woman to lead the community-based force of more than 200,000 soldiers and civilian employees with a geographic footprint that includes 50 states, five territories, and more than 30 countries. With more than 36 years of active and reserve military service, her recent assignments include Chief of Staff, U.S. Army Forces Command; Assistant Deputy Chief of Staff Intelligence, Office of the Deputy Chief of Staff, G-2; Deputy Director and Director, Intelligence and Knowledge Development Directorate for U.S. Africa Command, Stuttgart, Germany, to name a few.

Holding many positions of leadership within the military, Daniels has not shied away from excelling in her civilian career. Formally the Director of Advanced Programs for Lockheed Martin’s Advanced Technology Laboratories (LM ATL) and Director of the Contextual Systems Laboratory, Daniels has built a reputation for herself as a driven and well-organized leader as she transitioned from manager and engineer in LM ATL’s Artificial Intelligence Laboratory. Daniels has served on many advisory boards such as Defense Advanced Research Programs Agency (DARPA) Information Science and Technology (ISAT) Review Board, on the ISAT Steering Committee, and Drexel University’s Computer Science Department Advisory Board

Join us in celebrating Major General Jody Daniels on her recent promotion!

After completing the Infantry Basic Officer Leader Course in 2019 and taking command of the Woodstock-based Bravo Company, 3rd Battalion, 116th Infantry Regiment, 116th Infantry Brigade Combat Team from Capt. Timothy England, Capt. Candice shares that she is “honestly just ready to take charge of the company and lead my soldiers.”

Bowen, a self-proclaimed military brat born in Germany and currently residing in Northern Virginia, graduated and earned her commission from Penn State. She deployed to Qatar in 2016 and later volunteered for an assignment in Afghanistan, where she earned a Combat Action Badge. Bowen’s father, a retired Army sergeant major, pinned a blue infantry cord to her uniform, during the ceremony.

Following the celebrated announcement, Bowen offered this advice to other women considering a military career: “Do it. Just jump in there. Do it aggressively, enjoy it and have fun,” Bowen said, “If you enjoy it, have fun, and you are giving it everything you got, you will be absolutely fine. You will love it, and it will be the best thing you ever did.” Read more here.

Join us in celebrating the advancement of Capt. Candice Bowen!